Anyway, I kept writing and, at some point, discovered Zoetrope's Virtual Studio. One of the site features is a peer review process. You submit your story (short stories and flash are the preferred media) and open it up to frank and spirited critique by other writers. Since it takes time and effort from the participants, you have to "earn" their attention by reviewing the work of others. It's done with a point system and it works really well. It can be brutal and ego-crushing, but it has taught me so much.﻿

Once I had twenty-five or so, I started to work on organizing my short stories, picked the best nine and published them as a collection entitled "Riding a Strong Wind".

A reviewer said, “Your storyline is so shamelessly, grandly romantic ...”
and another,“the dialogue is fabulous, and the action/romance/everything is pretty inspired.”
Their feedback and insightful comments inspired me to keep going.

However, it soon became apparent that the reading public is not as keen on short stories as I am, so my next effort was a full-length romantic comedy, "Scot Free in Hollywood". In my younger days I had acting ambitions and became a member of Equity in the UK. My acting career never really took off, but I drew upon my own experiences on movie and television film sets to create a fictional (but reality-based) acting career for my lanky, self-deprecating hero Kyle Harrison. Unlike me, Kyle hits the big time and the rest is ... in the book.

I self-published it again on Kindle and started work on a prequel and a sequel.

﻿However, that same unconscious process was at work again and I was inspired to write a different story, a romantic thriller set in Italy.

A few months later, it was finished and was accepted for an Amazon Kindle Scout campaign. It's called "Night of the Webcam" and is now available on ﻿Amazon.

My latest published project is called "﻿Forty-Love in Positano﻿" and this time I've gone all out on the charm. It's about finding love when you reach the big 4-0, and your life perspective subtly changes -- but not in a bad way!

The travelogue aspect features Italy's colourful Amalfi Coast. Hazel is still very attractive but a tragedy in her past has marred her life, and now her romantic prospects are dimmer than ever. Jeffrey is handsome and suave, worldly-wise, and definitely well-heeled. He seems to be the perfect gentleman, but he may just be too good to be true. 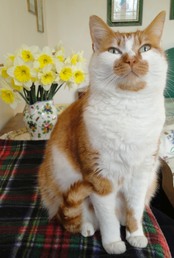 Currently I'm working on a prequel to the highly successful "Scot Free in Hollywood". Well, successful in relative terms, but seriously ... readers seem to like it, and that's fantastic. Some have been in touch and asked for more of Kyle and his world. I sat down to tap into Kyle's adventures and, for reasons I can't explain, what started to come out was his introduction to the fascinating world of making movies in Hollywood. So it's a prequel, it will be Book 1 to Scot Free's Book 2.

I'm enjoying the writing process, but it's a real challenge to fit the back-story after the fact. Any author who has ever attempted a prequel will tell you that there are times when you really feel like you've painted yourself into a corner. Fortunately, I have a trusted beta audience full of generous advice. Oscar, for example. Here he is pictured listening with rapt attention to my first draft.
Copyright © Robertson Tait.  All rights reserved
Powered by